Marsha Servetnick was President of the Junior League of Oakland East Bay in 1989-90. During her tenure there were about 375 actives and 600 sustainers. Her theme was “Navigating the 90’s” and she used all sorts of nautical puns and analogies in her communication with the league. She loved the League, her volunteer work enlivened her. She still calls volunteering her “drug of choice”.

The major lessons learned from her presidential year were things like: sisterhood, thankfulness, courtesy, timeliness, that strategic planning helps you organize both your life and your work, how to encourage others, and that public speaking brings out your inner self.

Some key things happened Marsha’s Presidential year. The President-Elect (PE) role was created. It passed by only one vote. Kathleen Odne was JLOEB’s first PE. The Maridel Moulton Endowment Fund was created. And an earthquake destroyed The Shop.

What was The Shop? It was the major fundraiser for the league from 1964 – 1998. It raised well-over $1,000,000 in its time for community projects. The Shop accepted donations from League and community members and sold items at affordable prices. Occasionally, they held boutique sales called “Table Temptations” or had $1/bag sales to move clearance items.

On October 17, 1989, the Loma Prieta Earthquake devastated The Shop and they had to close their doors. However, that wasn’t the end. Support from 25 other leagues and AJLI, as well as a grant from Wells Fargo Bank allowed JLOEB to replace the destroyed fixtures and supplies and reopen in April 1990 in a new location in Oakland. 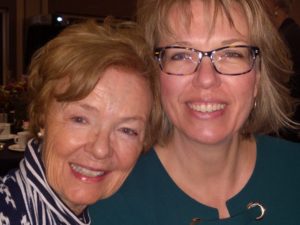 The League was always focused on current events. One of its 89-90 projects helped the community to replace its fear of earthquakes with knowledge and action. They had a 10-volunteer committee and $1,600 committed to Earthquake Awareness and Preparedness. The League developed a curriculum for pre-school through 6th grade with assistance and funding from a variety of community agencies. The league tested the program in the Oakland public schools and as demand increased, the league committee members offered trainings for school and community volunteers to teach the curriculum.

We must realize the comprehensive life experience that working within our values provides. Marsha spoke of sisterhood, courtesy, and thankfulness. I think that speaks to the importance of 1. being there for each other in support of our commitment to the cause, 2. Being kind and respectful toward all people, and 3. Expressing thanks for each other’s contribution and being thankful for the opportunities that we have to serve our communities.

Marsha’s service to the community didn’t stop when she went sustainer. She was prepared by JLOEB to lead well and used her interests to guide her. After, her presidency, Marsha went on to be a board member and/or trustee for Diablo Regional Arts, STAND!,  Animal Rescue Foundation, and Oakland Children’s Hospital. My hope for you is that you experience JLOEB as Marsha did and find motivation in sisterhood, courtesy, and thankfulness and think of JLOEB as a strategic part of your trajectory toward community leadership.